United Ink Flight 915 at the Cradle of Aviation Museum

UNITED INK – FLIGHT 915  at the Cradle of Aviation Museum

Watch this Video on Tattoo After Care

This video gives you the proper steps to tattoo aftercare. World famous tattoo artist and tattoo shop owner Lou Rubino breaks it all down for you.

In a fascinating legal case, Chris Escobedo, the owner of Elite Tattoo has filed suit against video game maker THQ for recreating tattoos Escobedo designed for Carlos Condit, a former UFC champion as part of their UFC Undisputed games. What many people might not know is that copyrights on tattoos are actually owned by the tattoo artists and not the people bearing their ink, unless there is a contract created to transfer the rights. Because Escobedo did not grant permission for his art to be recreated, and because he was not compensated for it, he has a strong case. The outcome of this suit will likely have long-term implications for the use and recreation of tattoo art in media.

END_OF_DOCUMENT_TOKEN_TO_BE_REPLACED

A woman in England is regretting her decision to go to a tattoo removal practitioner with only one hour of training. Stacy Evans had gotten a tattoo at age 18, and now at age 38, wished to part ways with her ink. Unfortunately, getting it removed by a novice resulted in an unsightly scar, which Ms. Evans has won a compensation claim for. The lesson here? Maybe go to a reputable tattoo shop like….oh, say Tattoo Lou's for all of your ink and ink removal needs! When dealing with body art, working with an experienced, well-trained, professional practitioner should always be your number one priority.

And now an update for the guy who had the Romney "R" tattooed on his face….he has no regrets, despite his face now looking like an out-of-date political bumper sticker, which is admirable in it's own way, we suppose.

Rihanna, one of our favorite tattooed celebrities, apparently wanted to go further than her artist would allow. It seems that last month, the songstress made a trip to her favorite shop with the intention of getting inked on her face! When she arrived, however, the artist in question refused to do the work, and dissuaded her from taking such a daring step. Rihanna, you do have a gorgeous face that needs no embellishment, and we are more than happy seeing your art placed elsewhere!

And finally, from the "never make a bet involving tattoos" department comes a story of a Texas A&M student who lacked faith in his team's ability to upset number 1 ranked Alabama last week. Of course, the Aggies did just that, and our fearless hero was forced to get the score of the game tattooed on his posterior, of all places. Another entry into the Bad Tattoo Bet Hall of Fame! 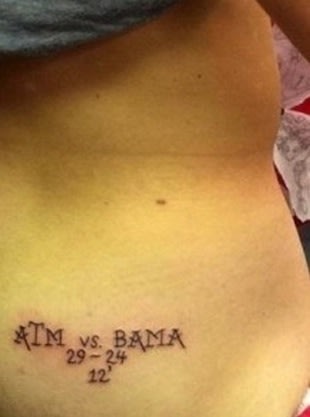 Yes, Scarlet Johansson is back on the front pages with a new piece gracing her flawless body! This time, Scarlet the Starlet (ok, she's a Star, but it's still clever, you have to admit) has gotten a horseshoe design with the words "Lucky You" tattooed on her side, as you can see below. And all we can say is yes, lucky us for being able to get a peek at it. Lucky us indeed. 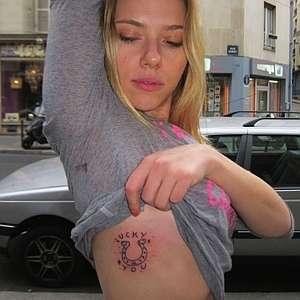 Tattoo artists are quickly becoming a fantastic source of help and innovation for people with body deformities and related issues. FOX News Tampa has an interesting article about  tattoo artists are using flesh colored ink to hide the appearance of scars, which is allowing clients to improve their body images and live happier lives.

Bobbi Kristina Brown, daughter of Whitney Houston recently got matching wrist tattoos of her mom's initials with her fiancé, Nick Gordon on what would have been Whitney's 49th birthday. The initials are surrounded by four doves which represent members of her family. Bobbi wants "to keep [her mother’s] legend going the right way," and we certainly hope she will.

And finally, the Dropkick Murphy's have titled their new album "Rose Tattoo." We have yet to listen to it, but approve highly of the name.

In Tel Aviv, there is a mass protest planned today marking World Vegan Day. One month after protestors gethered to brand themselves with a hot iron for World Farm Animal Day, this time they are planning on getting tattoos of the number 269, a number branded onto calves on cattle farms. While it's great to see these activists being so passionate about their cause, it's probably better for their overall well-being that they ease off the monthly protest schedule before these body mods leave them all looking like Pauly Unstoppable:

And now let's go to sports. It's been so long since Notre Dame football has been relevant, it's understandable that some fans would get carried away by the team's recent success. Enter Tracey Moore, a Notre Dame die hard who had better hope he never ends up being interviewed for a job by a USC graduate. Tracey, you see, has gone all in on ND pride by tattooing the Golden Dome, their main campus building onto the back of his bald…dome:

And finally, Justin Bieber has a new tattoo of an owl on his left forearm. This marks the eighth piece he's gotten, as The Biebs is apparently taking a page out of the One Direction playbook, working towards an edgier, adult image before his 14 year old fans turn into 18 year old haters. We'll ignore the fact that an owl tattoo doesn't exactly scream "edgy and adult." He's trying folks, let's give him that.

Eva Longoria is still in the process of divorcing Tony Parker. Sure, the paperwork is all final, but some things take longer to erase…like tattoos. Eva is undergoing treatments to remove the three tattoos she got in honor of her philandering husband during their brief marriage. It seems the old rule of never getting a tattoo representing a lover is quickly being ignored by people today. Can it be long before we start seeing tattoo removal costs added to alimony settlements?

The regular tattoo artist for One Direction was interviewed about the different styles of ink the band members get, and how it reflects their personalties. If you happen to be a 14 year old girl, you should go over to MTV.com to read it. If not, you've already stopped reading.

Those crazy Monsters of Schlock are at it again! Never heard of them? Neither have we. Apparently, they are a couple of brothers who works as a stunt duo, and one of them just tattooed the other during a rollercoaster ride at Playland in Vancouver. Yes, one brother took a tattoo gun and inked a smiley face on the other's thigh while they lurched around. Though they have attempted many more dangerous stunts, the brothers have titled this on the "stupidest" thing they have ever done.

Madonna is making headlines with her latest publicity stunt  political statement, depantsing herself onstage to reveal a fake tattoo of the name "Malala Yousafzai" across her lower back. Malala is a 14 year old girl who was shot by Taliban radicals for daring to support women's education. Really, Madge? We get that you've been enjoying flexing your activist muscles as of late, but perhaps the glutes are not the classiest place for political expression – just a thought.

Lance Armstrong was apparently brought down by a tattoo parlor owner. Kayle Leogrande is a former cyclist who was caught doping in 2004, and it was his case that led to the investigation of Armstrong. Leogrande moved on to open his LA area tattoo shop while Armstrong has seen his entire life fall apart lately, resigning as the head of Livestrong and being dropped by Nike. I guess we know the one place Lance will never go if he ever wants to get inked.

Imagine: you grow up wanting to be famous. You've got a good voice, some talent, and eventually you get your big break in…a boy band! Cue sinister music. However, all is not lost. A few artist have successfully managed to transition into serious adult success after their bubblegum pop years, and the winning strategy seems to revolve around developing an edgier image. Justin Timberlake did it by teaming up with Pharrell. JC Chasez…well, he never made it. Becoming a reality show dance judge didn't help matters. Harry Styles, however, may be quickly developing his own path to escaping boy band purgatory. The One Direction singer has gotten 24, yes 24 tattoos in just 8 months since being legally able to get inked!! Now all he needs is a breakout solo album that appeals to a wider audience than screaming 14 year old girls. God speed Harry. You'll need it.

Jessie J is a big fan of her own music, which is good. Imagine being, say, Eddie Murphy and having to sing the travesty that was "Party All the Time," a fate that simply no one deserves, except maybe Eddie Murphy. Jessie, however, loves her own songs so much that she decided to have lyrics from one of her songs inked on her body. Now the line "don't lose who you are in the blur of the stars" is tattooed on her right torso, so yay happy endings, right? Wrong. Due to a spelling error, yes, that's right, in the lyrics of her own song, "lose" was inked as "loose." It's a sobering reminder to all of us considering word tattoos to have them double and triple checked, preferably by a Harvard English professor, before committing to the design. Also please, please whatever you do, make sure you don't loose yourself in the blur of the stars. Make sure you are collared and leashed at all times.

Romeo Beckham, the 10 year old son of David and Mommy Spice was recently seen bearing a neck tattoo of his sister's name Harper. The ink is a copy of one of his dad's many tattoos, and before you go filing child abuse charges, yes, it's fake. If you wanted to hold a hearing regarding the Beckham's choice to name their son Romeo, however, that would be justified. Meanwhile, the pool is open for how many real tattoos the Beckham kids will end up with by the time they're as old as their parents.

Staying on the other side of the pond, and on the pitch, Daniel Agger, defender for Liverpool talked about his tattooed knuckles, which spell YNWA. We thought the initials meant "Yaks Never Wear Armani" which would be technically true, since Yaks do not wear clothes of any type; though if they did, we still doubt they'd have the money to afford…whoops, going off on a tangent there. Sorry for that. The Yak clothing debate is kind of a hot button issue. Back to Daniel's initials, they stand for You Never Walk Alone. That does make a lot more sense, actually. It's an inspiring message for a footballer who feels the passionate support of his fanbase and a love for his team, or an incredibly creepy one for a stalker. In the end, it's all about context.